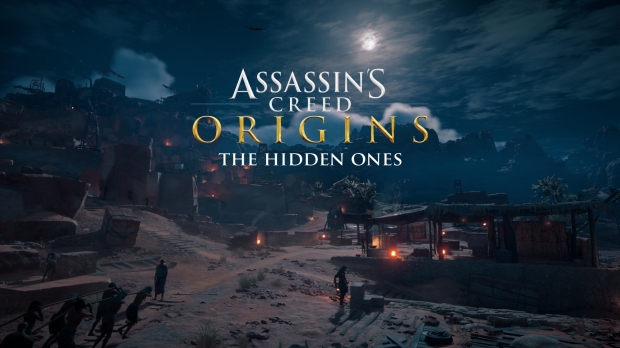 Assassin’s Creed Origins: The Hidden Ones adds a 10-hour chunk of additional content to the base game’s progression, although it doesn’t offer radical improvements or unique content that can’t be found across the vast map of ancient Egypt. With a short and simplistic premise to its plot, the Hidden Ones lacks the surprises I’ve seen in the original main questline, however I wouldn’t call the story here boring by any particular standards. Along with a new region, The Hidden Ones brings the same activities from the main game: treasure locations, enemy camps and side quests are plentiful, and once again, revealing the map is done by entering a region. The Sinai oasis doesn’t differ much in types of biomes present on the map from the base game, however it is a significantly more mountainous region which sometimes necessitates more climbing than one would like. All in all, it is more of the same like the main game, which isn’t necessarily a bad thing as Origins is an excellent game to begin with, but The Hidden Ones perhaps plays it too safe for the most part, and won’t offer players any radically new content. But if you wanted more of Assassin’s Creed: Origins, then The Hidden Ones offers a new plotline spread across Sinai’s 3 sub-regions and with added exploration and side questing, offers around 7-10 hours of additional content for the game’s fans to enjoy.

The Hidden Ones takes place 4 years after the conclusion of the main plot, and tasks Bayek with travelling to the Roman-controlled peninsula of Sinai to assist the Hidden Ones (or the Assassins’ Brotherhood in this game) in distress. The plot’s premise starts fairly basic, with 3 main targets to eliminate from the offset across 3 main quests (which I should add are very generous with the amount of XP they reward the player with), and then grows a little more through a few additional quests that lead to the head of the 3 main bosses from before. There are few surprises along the way, and the Hidden Ones has some interesting twists, but other than that, it is a very familiar structure to the base game, but the plotline is much simpler. The recommended starting level for the Hidden Ones is level 38, which only takes a few levels to get to upon completion of Origins’ main plot, however I’d point out that the best time to start this DLC Is around level 40-41. The main quests go from level 39 to level 43 in a quickly manner, so some might want to start the DLC at a later point in character progression, as enemy camps usually feature enemy captains at +2 levels than the main character, at least in my playthrough.

The new region of Sinai is comprised of 3 sub-areas, with 2 village settlements and numerous unknown locations to visit, which range from destroyed temples to large-scale Roman citadels up in the mountain ranges. Visually, the location is no different from any other region in AC Origins, although due to the base game’s vast diversity in regions, the DLC feels rather bland given its made up of mostly mountainous regions. These might be minor complaints, but considering it is a DLC piece, smaller diversity would be expected. No major cities exist in this region, which feels a bit like a step back as there is no detail to be found in the game’s settlements apart from the vastly-detailed temple in the upper settlement on the map. Still, given that the following DLC Curse of the Pharaohs features a large-scale city, as well as plenty of supernatural elements. The Hidden Ones plays by the book: kill 3 bosses followed by eliminating their over-arching leader. As I’ve mentioned above, the Hidden Ones doesn’t offer anything radically new to the player, however it is still a solid piece of additional content for those who may want to enjoy more of the Origins gameplay but have completed 100% of what the game had to offer.

The exploration aspect still remains interesting, as are additional quests the player can pick up to level up before the next main quest. There are still quite a few question marks to find across the region map and many enemies to fight along the journey. The enemies are exclusively Romans, however enemy diversity is still all accounted for, ranging from weak archers and topping out with giant guards with towering shields. The tension of infiltrating enemy camps in stealth still remains, especially if you aim to avoid detection entirely, and increases when you do screw things up. Combat requires precision and skill just like before, but in a fort, you’re sometimes bound to be stuck up against 7 enemies with shields along with a group of lesser foes (it happened to me once and I barely avoided getting killed). The Hidden Ones really doesn’t differentiate much from the base game, and while it does offer a few more hours of plot and the same exploration and challenges of the base game, this DLC plays it completely by the book, which is still not a bad thing. There isn’t much else that comes to mind when talking about the Hidden Ones, and it is just a short chunk of content for those who wanted more of AC Origins, which brings me to wrap up this review.

The game’s Photo Mode allows to capture some incredible screenshots

Despite some complaints I have with the Hidden Ones, it is a very well-rounded piece of additional content to enjoy, and completing its additional tasks is still as interesting as before. Side quests are designed in the meaningful way, which is where AC Origins really shines, and very few include the annoying escort quests we’ve come to expect from Assassin’s Creed, however NPCs in this title certainly have the courtesy to match the player character’s pace. The new region doesn’t offer anything new at all, and looks quite the same as the base game’s biomes, but it is not a bad thing for a small DLC pack. The region of Sinai still packs plenty of enemy camps and different tombs to explore, and with all side questing, takes roughly 7-10 hours to complete that counts as a considerable chunk by usual DLC standards. All in all, it’s worth getting if you really enjoyed Origins and there is plenty of content on offer for the price, but don’t expect it to offer any radical improvements or the mystique plot available in Curse of the Pharaohs. While the Hidden Ones plays everything safely by the book, it still succeeds at what Origins did best and that is never a bad thing if you did enjoy Origins. It’s a decent chunk of additional content that offers more of the same, but given how well the base game has been made at the start, I’d take more of AC Oigins anytime and would recommend it to others.