Looking for new games will now be much easier, with Steam updating its Upcoming Releases tab to show less clutter.

Valve recently made changes to its Steam store platform in a move to improve its Upcoming Releases tab. In the past, hundreds of new games would pop up on the store page weekly without any distinction or quality control for that matter. Now the new system tailors releases towards one’s preference, with a Popular Upcoming list displaying games users have shown interest in prior to release. It will display games that have been wishlisted, similar titles to ones you play, as well as DLC for games you own, while filtering out content unrelated to user preferences.

While it is argued that the Popular Upcoming feature will be detrimental to many indie developers, as their titles will struggle to reach notice, this is a smart move by Valve to filter out large swaths of bloatware that comes to the platform on a daily basis. As such, it is designed to “amplify interest through connection to quality customers,” states Valve, helping expose a particular game to its likely user base. This will help indie developers more so than harm them, as Popular Upcoming will also display new titles from developers you’ve shown particular interest in. Having to scroll through hundreds of titles in the past to find even one that’s interesting, I can see this being a huge improvement for the platform, helping eliminate unnecessary releases from a user’s feed. 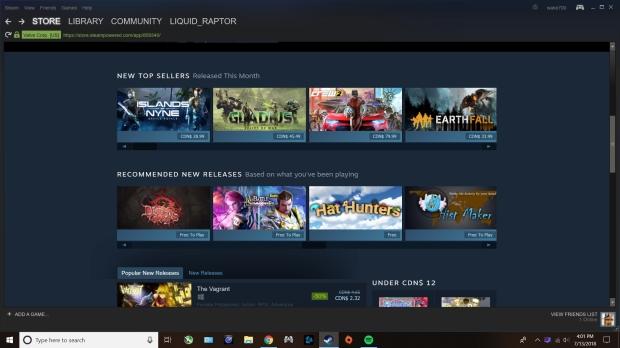 In case you don’t see any particular changes in the Popular Upcoming tab, it’s likely you don’t have any preferences set. To focus on games that are of most interest, users will need to go into Your Store tab and set preferences based on game tags, their personal cue and Followed Games & Software. Even if you don’t follow any games or developers, however, the Steam store will show New Top Sellers of the month, and recommend titles based on what you’ve been playing and own in your library. These changes should make the stream of new releases much more digestible, and keep your attention on titles you’re most interested to play in the future.

Those who’d like the older approach to showing a complete list of new releases can click on See More Upcoming Releases tab, which will display everything coming out on the Steam store. Valve isn’t taking away the feature, and users still have the option of seeing all upcoming content.