Titanfall 2 features one of the best single player campaigns I have ever experienced, which says a lot for a series which started as a multiplayer-only game sold at full price. The varied missions frame a short but sweet ride through different locales, each offering new gameplay elements or a unique spin on a standard shooting affair. The Effect and Cause mission particularly stands out, utilizing a time travel gadget to navigate levels between two time frames, but many others contribute to create an incredible adventure. Titanfall 2 has improved on essentially every level over its predecessor, and in a good way. Gameplay largely remains the same, but there’s now a campaign mode, along with a large selection of weapons and titan classes. While I was not down on Titanfall and felt it was okay, the sequel improves on everything to create a fun game with a campaign that just shouldn’t be missed out on. 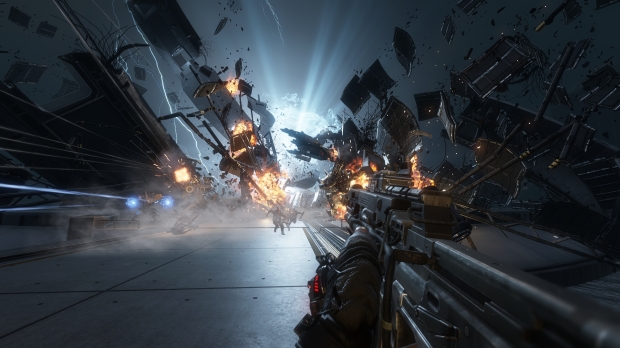 The story mode concerns you as a rifleman thrust into a pilot’s shoes from the get go, who has to adapt to the staggering change of pace in warfare. This leads to a developing relationship between the protagonist and his titan, where the player even has the choice at some dialogue options, which however carries no impact towards the story. Although Titanfall 2 fleshes out some of the lore for the universe, its the action that takes the front seat. I found the story itself to be largely forgettable besides the interesting relationship between a pilot and its titan that is presented through dialogue, but it was a small misstep considering the gameplay was an absolute blast. Despite the events taking place on a single planet, the game environments are really diverse so you’re never in the same spot as the campaign goes on. Each mission offers something new with no repetition, such as the time travel in Effect and Cause or a titan push in one of the latter levels. The gameplay remains a mix of pilot and titan gameplay introduced in its predecessor, and feels just as smooth as it used to. Although the on-foot gameplay reflects the old-school style of shooters, the titan gameplay doesn’t feel sluggish either and there is enough of dashing and power-ups to make it inherently fun blowing up other titans. The campaign is superb and even includes the best chase sequence I have ever played in its Ark mission, where you actually get to jump between a few ships in motion – simply exhilarating.

Titanfall 2 brings a lot of variety to the table and succeeds quite well at it with plenty of tools at the player’s disposal. Although the campaign lacks pilot customization, which is hardly needed, but the titan classes are significantly increased from the first game’s 3. Each titan brings in a new weapon and a set of special abilities, which make them best fit for different combat situations. Whether it is having to deal with large numbers of infantry or a group of enemy titans, class switching can be done on the fly, although it takes a slight bit of a menu to do so. Still, at a press of a few buttons, your titan swaps its class for a different set of attributes and then it is back to exterminating more forces. One thing I could possibly complain about is that Titanfall 2 draws a distinct line between its pilot and titan gameplay, at least in the campaign. Embarking into your titan, BT7274 is almost contextual and the game rarely gives you choice whether to proceed using one method or another. Its usually either one or the other, but the game switches them up a lot so that neither of the sections feel drawn out, besides, either is inherently fun.

Titanfall 2’s level design is one of the best I’ve seen out of any game, and Respawn have gone full out to integrate that with the gameplay. The jetpack is never contextual, and all of the campaign missions pack in semi-open levels with secrets to encourage exploration, but as far as I’m aware, the collectible pilot helmets carry no story context in any way. What those levels do bring, however, is a lot of ways to kill enemies and many paths to take for doing so. For example, if you’re boring you could snipe all the enemies from afar, or instead, as I did, run around them like crazy, while alternating between shooting, gliding and punching the remaining guy in the face. Titanfall 2 works great by enabling player freedom in all but some situations to ensure you’re never bored with what you are doing. I was disappointed to see a lack of pilot on titan combat in the campaign, as you’re never given large weapons to dispose of one, which further grows the separation between combat styles. For the length of the campaign, however, it does little to derail the pace of the entire story. A few boss fights are thrown in for good measure as well, which unfortunately only happen between titans and ‘boss’ is essentially a name for an enemy titan with twice as much health and shield as the rest, but it brings some nice challenge to the levels.

Titanfall 2’s weapon selection is robust, especially in its campaign. Among the many variations on shotgun, pistol and assault rifle, each weapon feels punchy and allows to easily dispose of large numbers of enemy soldiers. In multiplayer, weapons are unlocked through the levelling system as seen in the predecessor, but the choice is increasingly varied. Some weapons feel overpowered, like the EVA shotgun or the smart pistol, which lead to some imbalances in the multiplayer, but they also lead to the campaign turning into a breeze. On that note, the single player is quite easy on normal difficulty and the only few times I’ve died came from either falling or on a rare occasion misjudging how many enemies I’ve had around. For anyone who’s played lots of first-person shooters, challenge comes from higher difficulty presets. Even the mini bosses who are shown to be a formidable threat in their small cinematics can be easily dealt with as long as you dash behind cover when reloading. The multiplayer in turn requires more skill and knowledge of the map to be very successful, along with some team coordination to ensure victory. 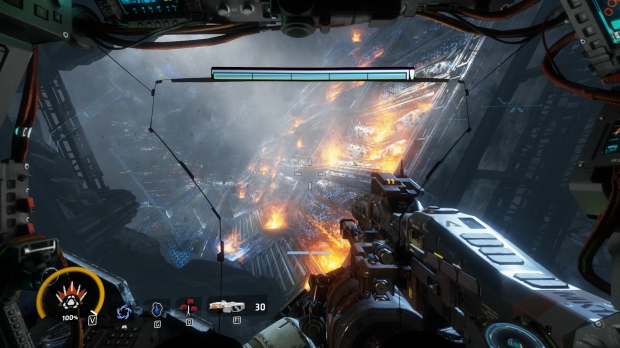 Concerning graphics, Titanfall 2 looks quite incredible, which explains the 60 GB space it took on my hard drive. The levels include lots of detail packed into them while the game still runs quite well, although of course system configurations would vary in performance. Something i quite liked about Titanfall 2’s campaign is that level backgrounds are actual places you visit later on, which makes a lot more sense than having them in the backgrounds. The developers made good use of the engine to make the game look fairly close to EA’s Frostbite 3 titles while Titanfall 2 retains its visual style. I wouldn’t call it unique, but the game’s locations show a colour stream rarely seen in most first-person shooters as of late. Sound design is superb as well, alternating between slow atmospheric music and the high-stakes danger scenarios where the music plays a lot faster. The game runs really smoothly and I never experienced frame drops, although at the time of review I had to download the very latest Nvidia drivers to unlock the full suite of resolution options, which I found odd considering my previous update was downloaded around after the time Titanfall 2 came out.

As for multiplayer, Titanfall 2 is very similar to its predecessor, but includes a lot of variety to help extend progression and keep players engaged. Among the varied titan classes and player customization, Titanfall 2 always has something to be unlocked or changed. Unlike the campaign, titan classes aren’t allowed to be switched on the fly to keep the match balance, and only 6 titan classes are available as opposed to 8 in the campaign. Still, the selection and customization are vastly improved over the game’s predecessor, covering both the visuals for pilots and titans, and also skills and character perks. Online matches are fast, which makes it easy to get through using just one titan loadout. And for many, finding a comfort zone in a favourite titan would always be a thing. Titanfall 2 finally allows for customizing the look of your titan, which is no longer confined to the predetermined visuals – a great addition to those who like to have personality in their game. Multiplayer modes remain largely familiar and still combine free running as a pilot and heavy attacks as a titan, though some new changes are welcome. Titan shields are no longer restored on their own, making the machines more fragile than they used to be. Pilots can still climb aboard a titan, but this time they pull out a battery which automatically removes some of the enemy’s health and which can be re-used to give friendly titans a boost. Titanfall 2 encourages teamwork more so than its predecessor, as the original Titanfall was rewarding to individuals rather than the whole team. Multiplayer largely stayed the same, but some new changes make it more enjoyable and the fun of multiplayer is something I’ll keep coming back to.

On the overall note, Titanfall 2 is an excellent first-person shooter albeit with a couple drawbacks, that don’t so much distract from the experience as they leave desiring a little more fine tuning. The game already brings many improvements that players have asked of in its predecessor and features one of the best campaign’s I’ve ever seen in a game, one that paces itself incredibly well and keeps you engaged until the very end. Although its very short, the single player mode provides enough variety to never feel stale, as the player goes from one colourful locale to another. Each level feels unique and many introduce an interesting spin on the regular gameplay. The game is even worth buying for the single player alone, but its online gameplay is also stellar. With its multiplayer, Titanfall 2 further addresses many of the complaints players had in respect to the original game by including customization for both pilots and titans, as well as a larger variety of titan classes to be selected. The customization not only allows to make your titan stand out in the field, but also expands to a choice of multiple character perks and upgrades to diversify playstyles. Titanfall 2 is the right kind of sequel to the original game and all of the improvements make it worthwhile playing, whether you enjoy an exhilaratingly fast campaign or spending hours on improving your multiplayer skills. Either way, Titanfall 2 is an enjoyable experience and I would recommend giving this game a try.