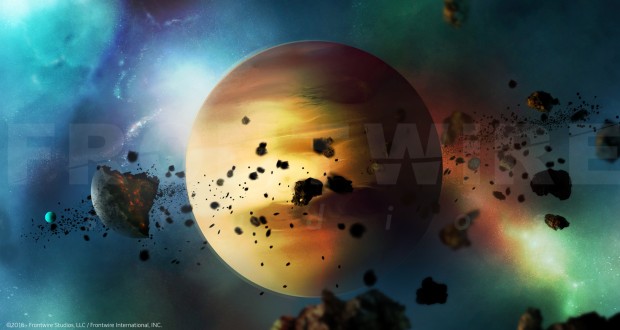 If you haven’t got on board with EA’s Star Wars Battlefront,  you might want to check out Galaxy in Turmoil.

Developer Frontwire Studios have released a teaser trailer for their upcoming Galaxy in Turmoil title, which originally aimed to be Star Wars: Battlefront 3. Getting a cease and desist order by Disney might have changed the title, but game development hasn’t stopped, and Galaxy in Turmoil is shaping up to be a spiritual successor to the Star Wars multiplayer shooters.

The older Star Wars: Battlefront games were a fun multiplayer take on the movie universe, featuring battles on a large scale that captivated the CGI fights involving thousands of troopers in some of the films. Featuring both ground and space battles, Battlefront titles represented all eras of the movies, where players chose from a vast arsenal of troopers, vehicles and spaceships. The revival of the Battlefront name by EA in recent years has mostly brought in mixed reception by fans, with first title lacking a single-player campaign while being sold at full price, and Battlefront 2 buried in the lootbox controversy.

A spiritual successor has been in the works for some time, created by the team at Frontwire Studios. The pre-alpha trailer they showed today looks very familiar for those who would have played the older Star Wars: Battlefront titles. It’s set to feature 32v32 multiplayer battles, where players will be able to choose between movement on foot, as well as ground and air vehicles. We could likely see the possibility to transition between ground and space battles in real time to captivate a truly massive scale of galactic conflict.

Galaxy in Turmoil is very much in the alpha stage right now, and no concrete release date is set at this point. A demo is listed to be coming soon, where registered players will be able to test the game first-hand. Third-person shooting demonstrated in the gameplay trailer looks very solid, although vehicles seem to need lots of polish to make them feel less floaty. It is too early to say whether Galaxy in Turmoil will have single-player at all at this point, although it is likely players could run matches against the AI. The game will be a free-to-play shooter once it releases.

Check out the gameplay trailer below: