Unlike its recent predecessors, Resident Evil 7 is a truly horrifying game experience. By reintroducing survival horror gameplay into its stale series, Capcom brought back the things everyone loved about the series in the first place. However, to adapt to modern horror tropes, Resident Evil 7 features a first-person perspective that brings it closer to likes of Outlast and Amnesia. While it does take some inspiration out of those, the game also sets itself apart by handing players guns to remove the feel of playing hide and seek for hours on. And unlike the action-oriented RE5 & 6, the 7th installment doesn’t shower you with loads of ammo and explosives, which here are very scarce. With twisted villains that are not only terrifying, but also very dangerous, I always felt on edge crawling through sprawling locations and scavenging for any bits of ammo I could find. Resident Evil 7 ultimately returns to survival horror roots and is both the best Resident Evil game by far and one of the greatest entries in the survival horror genre.

One of the game’s major highlights is the first-person perspective, which brings out the best in the atmosphere and art design. Resident Evil 7 is very grim, and it’s creepy locations are filled with various traps and enemy encounters. While new to the series, the first-person view is a very welcome change of pacing, especially given how well it integrates into the Resident Evil formula. If you own a Virtual Reality headset, the VR Edition is the best way to go, however is not necessary to fully enjoy the title. Even if you play it on a regular screen, Resident Evil 7 packs in enough visceral animations and creepy tension to unnerve even the most resilient. The sight of your protagonist getting his leg cut off with a chainsaw, for example, is one of the most brutal scenes in horror gaming, and that’s only one of many.

Set in rural Louisiana, Resident Evil 7’s setting is unnerving from the moment you get there. With seemingly abandoned houses that you soon learn are not quite empty, the atmosphere is very grim. Developers paid particular attention to level design, which shines at every step with environments filled with incredible detail. Resident Evil 7 also brings back the series’ focus on exploration, with supplies scattered throughout and some emphasis on puzzle solving. The latter aren’t particularly inspiring to those who love RE 1 just for those, but are fun in their own way, even if simple. As there are countless challenges to face getting to particular keys or items, solving those is not exactly a walk in the park.

Ethan, why did you not bring a weapon with you in the first place?

The plot is established as something entirely new for the series, however features some subtle references from the overarching Resident Evil universe. I appreciated having an entirely different protagonist from the rest of the series, even if Resident Evil is not a franchise I got into until recently. Ethan Winters doesn’t have military training or troops at his disposal, and ventures out to the Baker mansion simply for reasons to find his wife. Missing for three years, she sends out a video message to Ethan warning him to never look for her. While his ignorance of the warning may seem like a bad starting point for the plot, especially given how he goes there without any means of self-defence, it transitions well into a much bigger story. Without spoiling further, I’d point out that the story is very much worth paying attention to. Long time fans of the series would also appreciate game design references, where the Baker property itself is fairly similar to the Spencer mansion of the very first game.

The members of the Baker family that oppose the journey of your protagonist Ethan Winters are twisted beyond measure. Their introduction scene is one of the best in gaming at setting up villains, and each is absolutely out to get you. Jack Baker, who I almost believed could never be killed, follows you whenever you go in the introductory act and takes up a third of the game with some of the best moments. Just when you think he is gone, he shows up again at most unpredictable moments, and getting rid of him is beyond satisfying. Then there’s Marguerite, who unleashed deadly swarms of bees. Lucas, who sets up wicked traps to challenge players beyond logical measure, rounds off the act and is deadly in his own way. The game feels noticeably weaker in its latter third when you deal with the Baker family, which is somewhat of a shame as they are a major highlight. 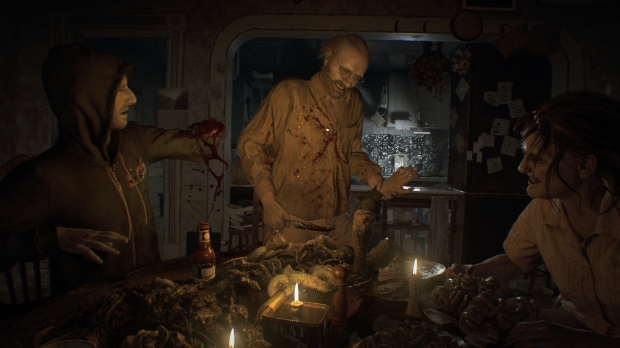 While Resident Evil 7 provides plenty of weapons to deal with enemy threats, I never once felt overpowered in my playthrough. Ammo is very scarce , and bosses are heavily resilient to damage, which makes enemy encounters intense. To fill the gaps between villains, Resident Evil 7 brings in standard enemies, which aren’t particularly inspiring in their motions, or scary. In latter part, they feel like a design drag and the game tends to stumble at overloading you with ammo as well. While having guns in your arsenal doesn’t particularly provide for a sense of security, they are a great mechanic to have. In the genre full of games that don’t provide players with the means of defence, Resident Evil 7 strongly succeeds. It could have been tempting for developers to overload players with guns and ammo, their limited use doesn’t ruin the pacing by any stretch.

Exploring RE 7’s locations is an experience filled with tension throughout the 25 hours it took me to complete the story. Without ever forcing jump scares onto players, the game’s pacing is ideal for survival horror titles. Enemy encounters are frequently broken up by exploration of both it’s indoor and outdoor locations. While running into foes rarely took me by surprise, other interactive elements provided for some spectacular horror moments. To flesh out some of the backstory, and also aid in discovering clues, are videotapes hidden in a few spots. These not only allow to progress through certain sections, but also feature some intense moments. Without wishing to spoil, I found these to portray some gruesome and surprising moments, which enhanced the experience further. For exploration purists, Resident Evil 7 features coins as a certain form of currency, which are few in the game, but unlock some high-end weapons and upgrades. Finally, the checkpoint system is very similar to that of Alien: Isolation, where players can only save during certain points in the game. This necessitates careful exploration as the protagonist is still very fragile.

Resident Evil 7 is an excellent addition to the long-running survival horror series, and brings the experience back around to the “horror” part. While aside from the first-person view it doesn’t deliver anything we haven’t seen from the series, it is a much needed departure from the few recent titles in the Resident Evil universe. An emphasis on limited supplies and careful exploration keeps players on edge, and the game is packed with terrifying sequences throughout the entire campaign. This isn’t just a hide-and-seek affair either, as Resident Evil 7 features guns to help you progress, however these never ruin the pacing due to ammo scarcity. A decent variety in those also allows to experiment over multiple playthroughs, and the game is one of the best horror experiences to keep coming back for more. If you somehow haven’t picked this title up yet, I’d encourage doing so, as Resident Evil 7 ranks among the best horror games currently on the market. It is also the best Resident Evil game by far, and offers a welcome change in perspective, as well as a good departure from the action-focused 5th and 6th entries.