Assassin’s Creed: Origins significantly reimagines the way an Assassin’s Creed game should be designed, and its new RPG direction gave us one of the best games in the entire franchise. It is up for speculation whether Ubisoft intends to release a new game every 2 years on a new schedule or if we’re about to start getting sick of annual releases like in the past, but Assassin’s Creed: Origins lays a solid foundation for future games to follow that might allow Ubisoft to release new and interesting annual releases. So far rumors on a new Assassin’s Creed are very minimal, but one could guess about potential leaks at E3 2018 or the internet. As Origins is still very fresh in the gamers minds’ with Curse of the Pharaohs that was recently released, it is not a concern so far whether we’ll get a sequel in 2018 or the following year, but here are the features many would want to see from the next Assassin’s Creed outing. While the list is mostly formed from my own opinion, the features I speak of are in no doubt wanted by many gamers. Here’s what I’d like to see in the next Assassin’s Creed game.

*all images used have been captured in Assassin’s Creed: Origins 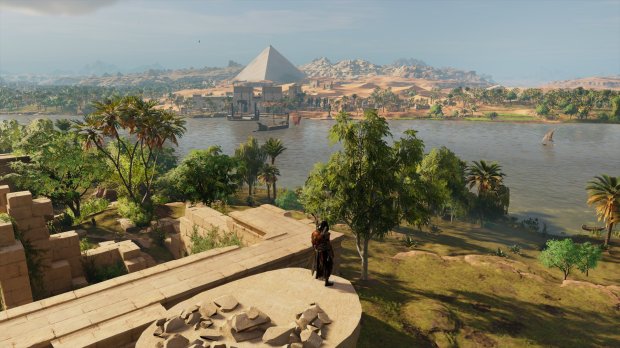 Assassin’s Creed: Origins has perhaps the best-designed world in the entirety of the series and its ancient Egypt setting has been flawlessly executed as the game transitioned from Action to an RPG with character progression, numerous quests and diverse gear. Following on from Origins, the next Assassin’s Creed could explore settings like Ancient Greece or Rome with similarly vast and diverse worlds that Ubisoft can build in a similar way to Origins. Ubisoft could potentially follow up with a direct sequel to Origins set in ancient Greece, although introducing completely new characters is also a great option to keep the series fresh. A similar gameplay format to Origins would be ideal for the sequel as well, although I’ll talk about it in detail later in the list, and we can have another excellent Assassin’s Creed on our hands. Ancient Greece serves best as a setting, and can potentially introduce a better overall plot more involved with the world’s politics and struggles, but regardless of which setting Ubisoft chooses, a sequel to Origins can prove to be another excellent game in the series.

More Ship Gameplay. Give players their own ship.

We haven’t seen a ship-based Assassin’s Creed game since Rogue in 2014 that was essentially a copy-and-paste game formed from Black Flag, although AC Origins features multiple naval missions that involve similar gameplay to the adventures of Edward Kenway, however still lacked personal elements such as ship customization or diverse missions based on the gameplay. The new Assassin’s Creed could bring back more sea-based gameplay and even give players their own ship perhaps. Set half the game in the Mediterranean Sea and islands allied to ancient Greece and we can have a really excellent game that blends AC Origins and Black Flag into a one well-designed game. Ubisoft could also give players the ability to dock in multiple cities and then free roam a large portion of the world on a mount to complete quests. Switch it up with sea-based exploration and gameplay both in the open world and the game’s plot and we can have a really interesting game on our hands and perhaps the strongest Assassin’s Creed yet. With that said, ship combat is also one of the best gameplay systems in the entire series and many gamers no doubt would want to see another Assassin’s Creed game based around naval exploration and combat.

With the new RPG direction, Ubisoft nailed about everything in Origins apart from the skill system, which was mostly composed of XP bonuses and various other dull abilities and only gave players a few really interesting skills to play with. In the sequel, Ubisoft really needs to improve upon the skill tree by giving players more interesting attributes to invest in. Perhaps give us a better skill system through numerous passive abilities or more interesting actives like the Charge Attack in Origins, and the skill tree can be much perfected. Another ancient setting also begs for more interesting tools that the main character could use and introducing an entirely separate skill tree dedicated to passives and gear wouldn’t be a bad idea. The goal would be to eliminate the endless boring skills seen in Origins and give players a more meaningful progression and skill systems to create an even better game than the already excellent Origins.

AC Origins has the strongest game design of all releases in the franchise, supported by relatively high review scores across the board, and keeping all of it intact would be crucial to create a sequel just as good as Origins. RPG gameplay has proven to work really well in the framework of Assassin’s Creed and is one of the highlights that make Origins very enjoyable across 60+ hours of gameplay, which makes sense to follow up with a similarly-designed game in the future. There are very few flaws in the gameplay of AC Origins and the involving combat was also one of the strongest points in the entire game, giving players something more challenging than a counter-hit formula of its predecessors. Having taken 2 development years to overhaul many of the game’s systems, Ubisoft should stick with the formula they came up with and only focus on improving these gameplay systems. The RPG design also made up for some very interesting side quests that fleshed the world out and as such, it only makes sense to stick with the new direction for at least a few games moving forward. AC Origins’ game design was one of the strongest points in the game, which allowed the game to secure high scores across the board in gaming media, and Ubisoft should retain all of the Origins’ systems to secure commercial success for the series. 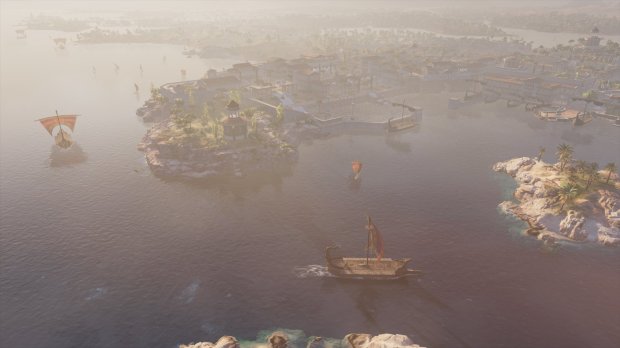 With Origins, Ubisoft have created the biggest open world yet for the series, giving players a large varied world with multiple major cities to explore. For the sequel, the developers should focus on changing some exploration systems such as collectibles, that haven’t been all that engaging in the form of animal nests and relic locations, as well as on further expanding the size and density of the game’s world. If we were to stick with the ancient Greece setting, this will allow developers to create large-scale cities and various villages with the overall world size similar to Origins if not larger. AC Origins has lots of interesting locations to visit and explore, which makes up for a lot of the fun during gameplay and the diversity ensures players don’t get bored of exploring these regions for treasure, viewpoints or enemy camps. A sequel should follow up on the same structure and give players a multitude of locations contained within an overall world map. Given the scale Origins achieved, Ubisoft already has a solid foundation for game world design and can build upon it further in the sequel.

Side quests in Assassin’s Creed: Origins were one of the strongest points in storytelling, putting the drama of the main plot to shame, and significantly fleshed out the world of ancient Egypt through dialogue that provided backstory on the struggles of Egypt, additionally introducing new characters that the protagonist already knows in the game. Side quests provided for numerous laughs throughout their completion, and the amount of thought placed into these can sometimes be staggering. For example, in Origins, side quests ranged from exploring depths of ancient tombs to reflecting the struggle of Egyptians against unofficial occupation by Greece, to solving murder mysteries and so on. The constant variety in side quests always introduces something new to the game, which makes completing those missions not only compelling, but sometimes satisfying with the outcome. A sequel should thus just follow a similar template and expand even further on the diversity of side quests available in the game, which would make for even stronger game design, but again, Origins already set the bar quite high for the series moving forward.

Origins has a pretty much perfect weapon selection for its gameplay design, but we could always go for more and more variety and content. Weapon selection worked really well in Origins and covered every gameplay style available to the player, which made experimenting with builds really satisfying. One major improvement to add would be multiple build slots to allow players an easy switch between multiple character presets. With diverse weapons such as bows, swords, spears, two-handed axes, two-handed swords and various other blunt weapons and sharp pikes, Origins had a perfect weapon variety to cover both heavy offence and stealth builds. Giving players multiple build slots in the sequel would allow players to easily switch between multiple presets, and the sequel would need to expand its weapon variety to a significant extent. Depending on the game setting, we might just see even more weapons in the sequel.