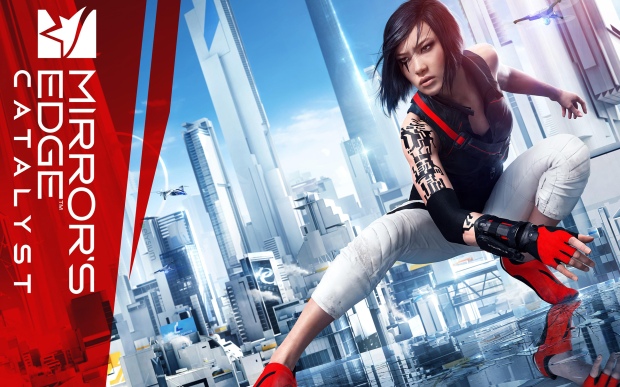 I emerge into the sunlight of the city’s rooftops, walking a few steps further towards the edge. In the distance, I see the tall frame of a skyscraper tower and the neon glow all around it. As the light recedes, the detail below me becomes very apparent, but it’s also a long way down. Mirror’s Edge: Catalyst is great at creating these moments, which keeps the pace going in between high tension chases and clever environment puzzles. The game world is filled by spectacular skyscrapers and running along the rooftops creates a great sense of momentum. First-person parkour feels very realistic, and Mirror’s Edge has always been great at capturing the sense of speed. Mirror’s Edge: Catalyst plays fantastically, and although its parkour might not be perfect, the game delivers on the freedom of movement and variety of accessible tools.

Mirror’s Edge parkour system remains excellent, and its a lot better in Catalyst. Almost every aspect has been improved and movement feels a lot faster. Mirror’s Edge: Catalyst expands the parkour in many different ways, mostly by offering some interesting tools at your character’s disposal. The original Mirror’s Edge felt rather shallow with its preset array of moves that followed a simple pattern, but Catalyst mixes it up with different abilities. Among them, the most outstanding is the Mag-rope – a grappling hook with a lot of functionality. The Mag-rope can be useful for traversing between rooftops set far apart, although places for the grappling hook are not positioned everywhere, neither they are for ascending buildings. Mirror’s Edge: Catalyst presents a similar problem I’ve found in Far Cry 4 – possibilities for ascending tall surfaces that are unfortunately in limited numbers, and it feels just as annoying here. However, to the game’s credit, there is already lots of freedom available for moving around the city and where the spots for grappling are available, they provide a lot of satisfaction to use. 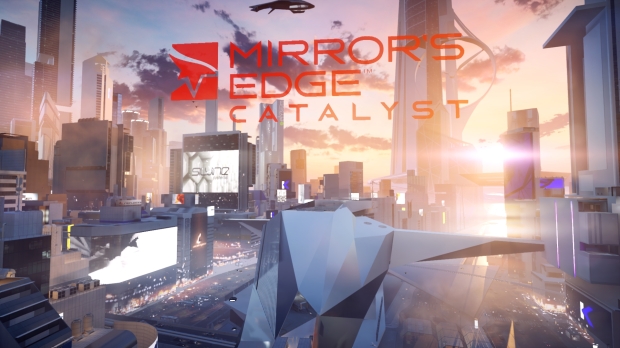 I wasn’t very impressed with the plot in Mirror’s Edge: Catalyst and it feels just as shallow as it did in the original. Since it has to revolve around the game’s central concept, the plot is weak and there isn’t much room for improvement. A lot of important events happen off-screen and more often than not, the character is tasked with simply running to a panel and pressing it. Gameplay flow does a great job at directing attention away from the weak story and it allows to enjoy the game even if it isn’t particularly involving with its plot. The cutscenes look outstanding though, and some spectacular explosion events are scripted within the game’s story. The weak plot is easy to overlook, and while it won’t deliver the spectacle or depth of many existing games, Mirror’s Edge: Catalyst chooses gameplay over story and I’m okay with that.

The game’s open-world design structure has me in two minds about it. On one hand, this opens up the game’s city significantly and enables a lot of freedom in traversal. Multiple paths litter the city and its relatively easy to find a way to get to a destination. Mirror’s Edge: Catalyst allows to get creative as well, and the developers scatter varied tools for movement among the level. However, the issue with the open-world design emerges when running between mission markers becomes long and tedious. To add to the commute, the move to an 0pen map brings out the usual guests in side missions and a vast array of collectibles. The missions are not inherently awful, and the collectibles add a drive for city exploration. However, it’s really disorienting when the map is littered with small objectives, but they can add nice distraction from the flow of main story missions. 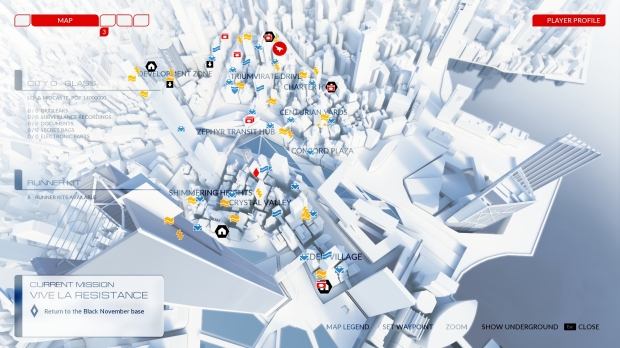 The game’s map really opens up as you go along, and a large portion of the city is already accessible halfway through. Mirror’s Edge: Catalyst has a fast-travel system to help with tedious commutes, although it is very limited. The player can only travel to safe houses, and those have to be unlocked through a GridNote puzzle beforehand. Parkouring along the rooftops remains the most efficient method of travel, one that also lets players see the city’s visual spectacle. Exploring on the other hand is little rewarding – grid leaks and control chips scattered around the city do little to advance player progression or unlock access to new tools. They simply exist to advance the game’s completion percentage, although its still fun to just explore the big city and find new pathways.

The City of Glass in Mirror’s Edge: Catalyst provides for one of the most spectacular settings too, with its flow of neon lights and weather effects. The game’s release on the Frostbite 3 engine has served to greatly benefit the levels of detail seen in the setting, and it lets the City of Glass shine. The view is often breathtaking and incredibly far draw distances provide a spectacular picture. The game’s world has a huge amount of white, but its nicely varied up whether it’s the yellow Construction district or the purple neon of Residential District’s billboards. The red colours indicate a path to follow, very much in the style of the original, however this works through the new Runner’s Vision feature, which highlights items within the world. Mirror’s Edge: Catalyst constantly changes its environments, and although the setting can’t help but show off a futuristic vibe, distinctions can clearly be seen when moving along. At night, the city looks even better when all the neon glow is present and it really helps deliver the atmosphere of the world across. The Frostbite 3 engine is quite spectacular and it really shines in an open-world game like Catalyst. Pairing up the game with powerful hardware ought to do the trick, and on my GTX 1070 I’ve been able to achieve solid performance while all the settings were cranked to ultra. 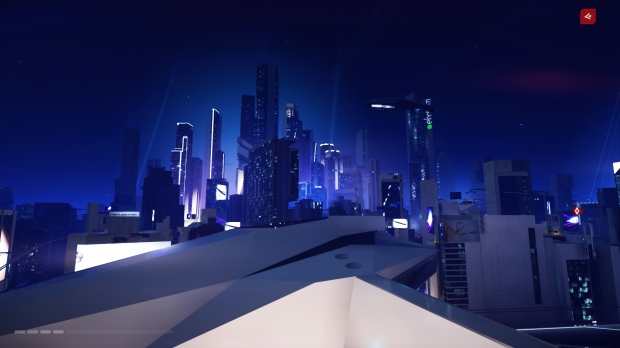 Mirror’s Edge: Catalyst is not a perfect game however, and in fact, many of the original’s mistakes have found their way over into the new entry. Most notably among those, the melee combat system is not particularly well improved, and remains as awkward as it was in the first game.Mirror’s Edge: Catalyst varies it up with multiple attack combos against different types of enemies, but the first-person fist combat feels much out of place as it did with the first one. Guns are thankfully gone, so you no longer have to deal with an awkward shooter slotted into a first-person running game, and Mirror’s Edge: Catalyst provides a contrived reason for why guns can no longer be used. However, they weren’t a feature that I particularly miss and it doesn’t deserve much attention. Melee combat carries the game pretty well, only if it wasn’t more annoying than I’d like. Most cases have the option of running away to evade the fight, but the game has a habit of forcing players into locked rooms filled with enemies, where fighting is the only option. Often with disastrous results too, as the enemies get tougher as the game goes on, and the not-so-smooth dodge move would get me killed often.

Despite that, more often than not I would fall off a building by accident, sending me plummeting down fast into concrete. Navigating the city is tricky at times, as plenty of wide gaps are present. Those are occasionally mixed up with bridges or rails to get across, but often require to follow down a specific path. Mirror’s Edge: Catalyst made me die quite a lot more from falling than fights, either because I thought the height was low enough to stay alive, or because the path I took happened to have a big chasm in front of me. These moments are not game-breaking, but nonetheless I ran into a few loading screens on the way, and these have a tendency to break the pacing. Mirror’s Edge: Catalyst doesn’t look to suffer from many technical issues either, and over the time i played it, significant glitches didn’t happen. On the multiplayer side, the game offers online leaderboards and friend challenges. Any given path can be made into a run that then allows to compete among friends. The online features aren’t much, but for some people it can create additional value through extra content. 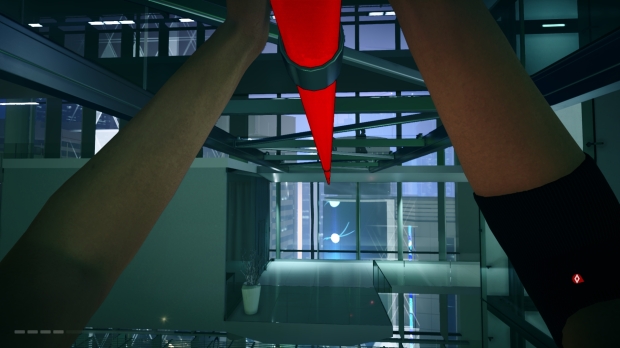 Mirror’s Edge: Catalyst is not flawless, but it is a very enjoyable game, assuming you like the notion of first-person parkour and no guns.  Mirror’s Edge: Catalyst is excellent at parkour and provides a lot of variety through its multiple paths and some useful tools. The game’s move to open-world and EA’s Frostbite 3 Engine has resulted in significantly higher detail across the board and the city usually looks spectacular from any angle. Paired with excellent parkour, the world becomes a joy to explore, although repetition becomes apparent the longer you play the game. The melee system remains flawed like it did in the original, and simply feels too awkward to use within a game like Mirror’s Edge. Guns are thankfully absent, as first-person shooting was even worse in Mirror’s Edge, but the game’s tendency to make enemy encounters inescapable produces frustration. With that said, all elements come together very well in this game, creating one of the best looking and playing titles of 2016. The entire progression curve doesn’t make the game exceptional, and many could find it boring, however Mirror’s Edge: Catalyst is still worth checking out.